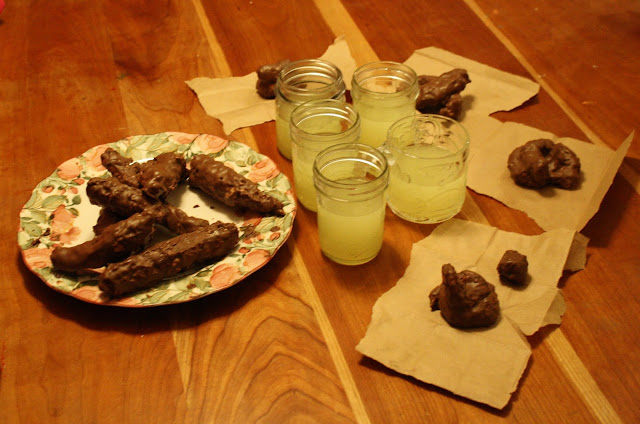 Just wanted to share a fun and super easy April Fools Dessert.  It's POOP & PEE!!!  My husband likes to change song lyrics whenever possible to poop and pee (yep, he is 7) so in his honor I made the above treat for our family.

The poop is rice krispie treat, hand shaped like poops and dipped in melted chocolate chips.  The pee in lemonade.  And for effect we served the poop on paper bags.

It was a huge hit, lots of laughs, tasty, and made from stuff I already had in the pantry!

Email ThisBlogThis!Share to TwitterShare to FacebookShare to Pinterest
Labels: Munchies

What Eastern Oregon taught me about Ferguson

My family of origin are all in agriculture.  Dairy, beans, beets, peas, sheep, cattle, swine, hay, barely, and of course potatoes.

My uncle recently sold his sheep to my brother in law.  He was just too tired of fighting BLM and Forest Service and the Conservationists that swore his sheep were destroying nature.

My brother in law has only been running sheep for a few years and is already so fed up with all the BullSh!t that he is dry lotting them.  That's right folks, he is keeping 6,000 Ewes and their lambs (they average twins) on his ranch and feeding them twice daily.  Instead of continuing the once symbiotic relationship of grazing open lands keeping wild grasses cut short and reducing fire hazard.  You might think native herds could do this, but I assure you, most deer prefer the grass in my pasture not the wild stuff.

My grandpa's farm consist of a dozen farrowing sheds, that have stood empty for almost 15 years, because it costs more to feed a pig than it costs to buy pork at the grocer.

I'm not sure if the nay-sayers think we should all become vegans or that wool is no longer a needed fiber when polyester from China is so much cheaper and apparently better on the environment *sarcasm in full swing*?  But I do witness the frustration and desperation of my family members.

I'm also a Cop's wife.  I have no words that adequately express the toll this profession takes on my husband, myself, and my children.

A bunch of healthy middle age men with zero sex drive because they have nothing left to give.  Their job takes everything out of them.  And that is just the most straight forward unexpected example I can come up with.

Last night he called to say good night, later than usual and then abruptly ended the conversation, because he had probable cause to stop a known dealer.  A known dealer that is also armed.  I assure you that my sleep consisted of tossing and turning from that call until he crawled into bed at 7 this morning, by which point I was already up with the children.  So I'm going on a power nap that I caught between school drop off and library story time. (BTW he took a bunch of meth off the streets with that stop, high school parents may send their thanks)

And so when my two worlds collided this past month, in Malheur/Harney Counties, Oregon.  I was expectedly overwhelmed.  My family still farms in Northern Nevada and Western Idaho and EVERYONE had an opinion.

I tried to stay out of it.  I tried to ignore the flood of one sided opinion on my news feeds.  And then something unexpected happened.

I started to understand the riots in Ferguson.  I'm not talking about whether the cops in either shooting were good guys or bad guys, justified or not.  I'm not trying to place innocence or blame.  I am simply stating understanding.

The root problem isn't about race, or regulations, or cops.  Because most people are good, most regulations had good intent, and believe it or not, most cops are just trying to stay alive.

The problem is that people are frustrated, oppressed, stagnate, and DESPERATE.  They are so desperate for change that the thought of living is no longer the greatest priority.  They just need to be heard.  I don't have a solution.  This problem is too wide spread and has so many faces.  I'm just making an observation.
We need to remember that in the end, every problem is about desperate people, people with names, faces, and families full of good intent.  The internet allows us to become faceless bullies that exhibit little charity.  Maybe part of the solution is for us all to practice a little bit more patience and understanding.  You don't have to like it or agree with it.  But put a face on that problem, and exhibit kindness for humanity.

Posted by The Mean Mama at 3:04 PM No comments:

There Must be Rules, but there is also Redemption

And Johnny Cash agrees with me.


His words are especially poignant considering his very public struggle with addiction, serving jail time, and his relationship with June started before he and his first wife divorced.  The atonement is real people.  You can break all the rules, screw up your family and life, and God will still love you, He will still redeem you.


"Thank God for redemption, or I wouldn't be here." - Johnny Cash


Enjoy the beauty of the Redemption of the Man in Black
Posted by The Mean Mama at 3:23 PM No comments:

The Mean Mama
Wife of my Best Friend & Lover, Mama of 5. Living a chaotic, but blessed life.